skip to main | skip to sidebar

Icing on the cake

Gloves appear to have been worn as early as 440 BC but it wasn't until the 13th century that women started to wear gloves as an accessory. Women in the 1930s made wearing gloves more of a fashion statement rather than in item to protect or keep your hands warm. By the 1940s and 1950s gloves were an outfit staple for women and were worn almost everywhere. From social gatherings, to fancy restaurants, parties and even just going out to run errands or get grocery's. Gloves complete any look from a ball gown made of silk, a cotton day dress to a sexy corset (to the left Betty page in leather gloves, a gorgeous corset garters and stockings).

Styles:
A common favorite was and will always be wrist length gloves, perfect for every day wear and these were the most commonly worn gloves and can be found in any color and texture. Perfect to wear on a hot day or a cold night, the shorter glove is a must have for any gal trying to recreate the classic looks from the 1940s and 1950s. 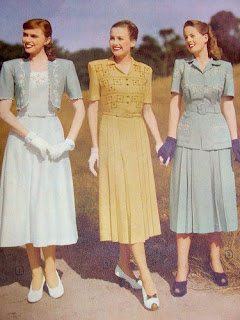 (to the right is a picture from the late 1940s, 3 lovely young lady's wearing gloves) Clean gloves were also the hallmark of a lady and white or cream were the most favoured gloves. Elbow length gloves as well as longer gloves are perfect for cold weather, going to the opera and also look great with an evening gown or a silk prom dress. It was very common for long styles to have buttons down the side, making it much easier and elegant to take off the glove.

Gloves are a great way to make a subtle statement and complete that 1950s look. Plus they are easy to take off and put on to dress up or dress down and they look darling hanging out of your vintage purse when not worn. With so many styles to chose from; like buttons, bows, embroidery, cutouts and ruffles the options are endless and the list just goes on and on. My favorite look for summer are sheer gloves and gloves with cut outs, because they let in a breeze keeping your hands cool. My latest obsession is sheer gloves, I just bought 2 pairs: a new pair of sheer black elbow length gloves that look positively retro but are newly made and a pair of vintage dark blue wrist length gloves that are just stunning.

Gloves were worn everywhere in the 1950s and completed most any look or outfit, why not let them complete your classic look. Like icing on a cake, gloves just make any outfit a little bit more scrumptious.
Posted by Darla: Retro Ways at 11:16 AM 5 comments

As I drove to work this morning I thought about the recession we are in and how similar this situation, is to the economy at the beginning and during WWII. I always hear these public announcements on the radio about the drought and how water usage could soon be mandated and fines given out for using to much water (this is only in southern California that I know of). This sounds eerily similar to the beginning of World War II when rationing systems were put in place in the United States. The first item to be rationed in 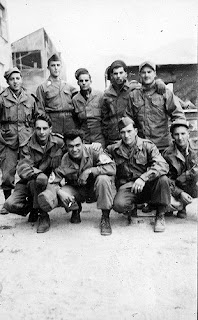 January 1942 was tires, because supplies of natural rubber were interrupted because of the war. Soon after, passenger automobiles, typewriters, sugar, gasoline, bicycles, footwear, fuel oil, coffee, stoves, meat, lard, shortening and oils, cheese, butter, margarine, processed foods (canned, bottled and frozen), dried fruits, canned milk, firewood and coal, jams, jellies and fruit butter, were rationed by November 1943.
It was required to get classified, and a book of rationing stamps was given, this was done by appearing before a local rationing board. Each person in a household received a ration book, including babies and small children. Imagine today if we were rationed on things like fuel and shoes. I know I would sure have to change some habits, I am the first person to admit it I have and addiction to heels.
What in the world would I do if once again pleasure driving was prohibited, and all road trips would be thing of the past. Its so interesting how times have changed, certain supplies and materials so limited today that we are even running out of water in some areas, any we can not run on fossil fuels forever. Putting limits on are intake of goods is that something we need now? (to the left I added a picture of some soldiers in fatigue during WWII) With the war going on and are debt rising, should we learn to make use of are resources better and live like we were back in the 1950s.
Back then when a family ran out of their coupons they could not buy rationed goods till the next month, victory gardens were encouraged. (here is a great advert for victory gardens from the 1940s) These gardens provided fresh healthy fruit and vegetables, cut down on food bills, as well as saving on gas by not having to drive to the market. 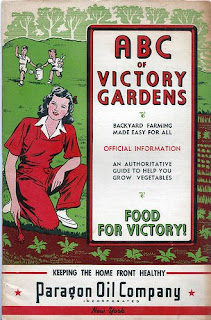 Now to me that sounds wonderful, if only I could start a garden of my own immediately I would. Plus its an excuse for me to take out one of my old patterns from the 1950s I have collected and make my self an outfit to garden in that is easily washed and comfy for the backyard. Sadly at the moment my boyfriend and I rent a room and are not moving into are own house until july of this summer. I think I will wait until we are settled to start my new garden (don't want to shock my little plant friends).
I have always thought of my self as old fashion but now more then ever I am striving to live simpler, live like a young couple would have in the 1950s. Make those easy changes to name a few cooking more often, not using paper towels but instead cloth towels, and also making my own clothing, to improve my human foot print on this world and keep myself sane. Forgetting about what the media wants me to dress like or how they think I should do my hair but I believe it is important to bypass all the trends and live a much simpler life. When I say simpler I mean cooking at least 5 nights a week and never putting a TV dinner in the microwave but chopping the onions and carrots yourself. Once I get home from work tonite I will cook a nice meal for my boyfriend and also start working on a new outfit made with a pattern from the 1950s. The cost of buying clothing is way more then making it yourself plus the fit is perfect, a well fitting outfit always flatters any size or height.
Posted by Darla: Retro Ways at 2:06 PM 0 comments 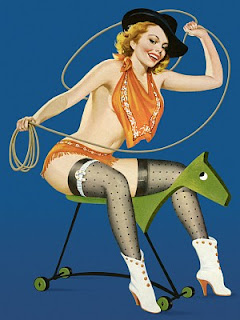 The word Pinup became synonymous in during the roaring 1920s and was introduced to the English language in 1941 however the practice is dated and documented all the way back to at least the 1890s. Aside from the traditional drawn pin up, many pinups were photographs of actresses and models. Including one of the most popular early pin-up girls was Betty Grable, her poster hung from many lockers of G.I.s during World War II.
Alberto Vargas
Alberto began his career in the United States as the official painter for the Ziegfeld Follies from 1919 to 1934. Shortly after Alberto moved to Hollywood where he was employed as an artist by various movie studios. Then in 1940 he replaced pinup artist George Petty at Esquire magazine. From 1940 until 1947, his flawless watercolor and airbrushed Vargas Girls adorned air crafts, ships, and even uniform jackets of the US servicemen during the World War II era.
From 1940 to 1946, while working for Esquire, Vargas would prepare a total of four preliminary drawings for each of his paintings. The first three were drawn on fine tissue paper, the fourth on a heavy vellum parchment paper. Each tissue showed increasing 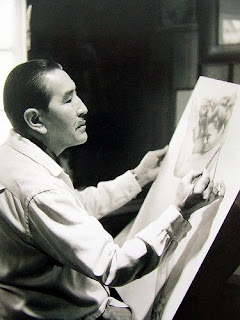 detail from one state to the next finally the parchment state showed the most detail because of the paper's colour and texture, was almost identical to the final painting. These were often drawn with the model nude, then Vargas added the clothing to the final painting for publication. In the late 1950s the “Vargas Girls” debuted in the pages of Playboy magazine as a monthly feature. While working for Playboy, Vargas did one tissue and occasionally a few parchment studies for each of his published paintings. Both the “Vargas” and the “Vargas” girls are included among the most recognizable cultural icons of the 20th century. (Pictured to the right Vargas works on one of his iconic images in his studio)
The gorgeous girls that Alberto Vargas created with his bear hands will always be my biggest inspiration. When it comes to sassy outfits, immaculate hair, great props, flawless makeup, the most adorable face expressions and the best poses, Vargas pinups win hands down.
Posted by Darla: Retro Ways at 5:43 PM 2 comments

Darla: Retro Ways
San Antonio, Texas, United States
I am just a vintage girl from Los Angeles living in San Antonio with my boyfriend and our 3 dogs. Art, sewing, daydreaming and hunting thrift stores for things from the past keeps me sane. Feel free to drop me a line, DarlaRetroWays [at] gmail.com